The Bucyrus Erie model 1850B while not the largest shovel ever produced is the largest remaining. It weighs 5500 tons or 11 million pounds and has a bucket capacity of 90 cubic yards or 150 tons. Big Brutus is 160 feet in height and took 52 men 11 months to assemble in 1962 after having been brought to Hallowell, Kansas in 52 railroad cars.

Although Brutus was designed for a 25 year lifespan, only 10 years were achieved, not due to the reliability of the 1850B, but due to market forces, namely cheap low sulphur coal from Wyoming and Montana. Powering it's huge electric 15,000 hp motors was no joke. In the it's last month of operation in 1974 Big Brutus used $27,000 of electricity, $137,000 adjusted for inflation.

It's been calculated that if Big Brutus had worked in a straight line it would have dug a pit that would have been 120 feet wide and 40 to 50 feet deep from Hallowell, Kansas, to Fort Worth, Texas, thats 368 miles! 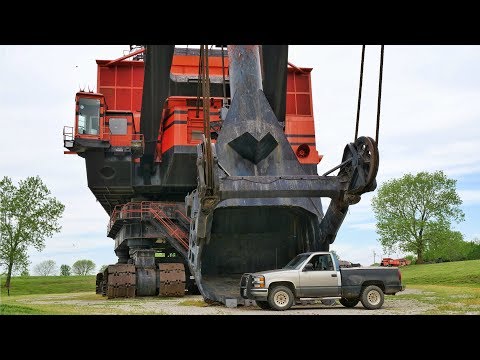 Giant chainsaw in the world

How to recover a stuck 349 excavator

The Top Largest Bulldozers in the World

Incredible Drilling of Underground. - The World's Most Powerful Machine.

Professional driver jackknifing a 53 foot trailer into a parking space.

Stupid Driver in the World