A three-wheeled motorcycle powered by a Chevrolet V8 502ci engine, usually found in supercars, have just arrived in Ho Chi Minh City to many people's amazement.

The owner had waited for its arrival for 12 months before he spent another two months on customizing the trike.

A powerful Chevrolet V8 engine able to produce anywhere from 300 to 750 horsepower is likely to make it a unique trike in the Southeast Asian country.

Coated in yellow, it looks like a heavy 'Tyrannosaurus' and boasts an engine capacity of up to 8,228 cubic centimeters.
The vehicle measures 3 meters long, 1.8 meters wide, and 1.2 meters high with a 47.4-liter fuel tank that can guarantee long journeys.

The two front wheels, often used for cars, are 300 millimeters in diameter while the rear one is even bigger: 320 millimeters.
The supermotorcycle has a grill like a hot rod's, with multiple slits on a big metal barrier underneath, and a saddle made by American producer Advanced Custom Design. It was raised higher than the Boss Hoss original.

Among other impressive features are a light-emitting diode (LED) system in the front and rear and a remote control to start the motorcycle, turn the light on and off, and operate the hydraulic pump.
The Boss Hoss 'monster' is equipped with an automatic gearbox like a car and an extra reverse gear that allows it to move backward easily.

Its general structure is well-balanced thanks to springs and horizontal metal bars connecting between the main frame and the wheels. Eight cylinders are neatly installed on the sides while the waste gas transmitting tube is connected to two small exhaust pipes below.

Carbon fiber, aluminum, titanium, and magnesium are used throughout the three wheeler to make it a fairly lightweight trike despite its grandiose structure.

Its owner said that he will use this motorcycle for sports events and community-oriented activities. 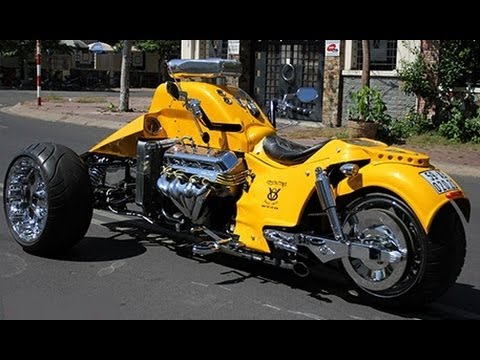 The most amazing inventions and unusual vehicles invented by people

This Diesel Motorcycle Is Built From Everything... Including The Kitchen Sink